10 Servant Leadership lessons from "The Art of War" Book

Recently, I had a chance to read the book "Sun Tzu - The Art of War (Spirituality for Conflict)" by Thomas Huynh. Thomas Huynh has made an attempt to explain to the readers how "The Art of War" principles can be followed by ordinary individuals and corporates to effect a positive change in their life or company or community.  I learned a lot of Servant Leadership lessons from this book and I have captured some of them in this blog post.

Sun Tzu, who lived  several thousand years ago, was a military general and philosopher in China. He captured his wisdom for warfare in the book "The Art of War", which has been treasured for nearly 2500 years. Several notable personalities such as Colin Powell, Bruce Lee and Ronald Reagon were influenced by The Art of War.

2. Sun Tzu treated his soldiers like his own children, caring for their health and well-being. Even the captured enemy soldiers were not killed, but rather were treated well and incorporated into his own army

3. You don't have to be formally appointed to become a leader, you automatically become the defacto leader when you step-up and guide others out of a dilemma and into a better situation

4. Your leadership ability depends more on your actions, than on your official title, rank or status in life

6. If you care about your supporters, you can discipline them and they in-turn will unite in purpose

7. Anger focuses your thoughts too much on yourself - your losses, your wants, your feelings and prevents you from dwelling compassionately on the needs and well being of others

8. Sun Tzu values leaders who can perform the basic, everyday tasks well over those who display flashy heroics in "isolated incidents"

9. The general who does not advance to seek glory or does not withdraw to avoid punishments, but cares for only the people's security and promotes the people's interests is the nation's treasure.

10. The more you forget about yourself and shun glory, the more people will remember you and glorify you.

Servant Leadership is a concept introduced by Robert Greenleaf in 1970. He says "The servant-leader is servant first… It begins with the natural feeling that one wants to serve, to serve first. Then conscious choice brings one to aspire to lead".  Sun Tzu talks about several leadership traits in his book "The Art of War", many of them resembling the Servant Leadership traits highlighted by Robert Greenleaf.  Today, several volunteering organizations and corporates practice the concept of Servent Leadership to maximise employee engagement, productivity and ownership.

(Also read: The Serving Leader by Ken Jennings and John Stahlwert / Rhetorical Devices from "The Art of War" book)

Posted by Saro Velrajan at 8:50 PM No comments:

Email ThisBlogThis!Share to TwitterShare to FacebookShare to Pinterest
Labels: Leadership

The Serving Leader by Ken Jennings and John Stahl-Wert

I had a chance to read the book "The Serving Leader" from the Ken Blanchard Series, written by Ken Jennings and John Stahl-Wert. The authors have sandwiched the Servant Leadership lessons in a fictional story. This blog post summarizes some key lessons and learnings from the book.

The following are the 5 powerful actions that the authors teach for you to transform your team, your business and your community: 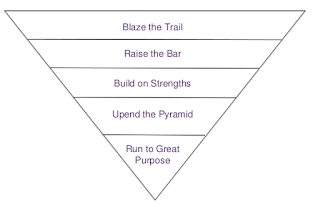 Source: The Serving Leader, by Ken Jennings and John Stahl-Wert

Some traits of a servant leader and key messages worth noting from the book:

If you want to learn more about Servant Leadership, visit the authors' website http://theservingleader.com/

(Also read: 10 Servant Leadership lessons from "The Art of War")
Posted by Saro Velrajan at 8:54 AM No comments:

Email ThisBlogThis!Share to TwitterShare to FacebookShare to Pinterest
Labels: Leadership

You call him as charismatic; you call him as argumentative; you call him as a visionary and you call him as brutal. You will be right. When I finished reading the last page of the book "Steve Jobs" by Walter Isaacson, I get the feeling of having watched Baahubali 2. Jobs' tale is both instructive and cautionary. It is a tale of highs, lows, surprises, successes, failures, rivalries, emotions, love, hatred... and everything else that you would see in a movie like Baahubali.

Rob Siltanen's quote "The people who are crazy enough to think they can change the world are the ones who do" won't fit anyone else better than Steve Jobs. Jobs aspired to live at the intersection of humanities and technology, and he just did that throughout his life. He always thought that he is special and he compared himself with the likes of Einstein and Gandhi. I am not sure if he is as good as Gandhi, but he definitely made an impact, as big as what Einstein made with the theory of relativity. Jobs' feeling of getting rejected at an early age... created the feeling to prove. He did prove to the world, that he is different.

Steve Jobs not only built great products, but also built great companies. All of the products that he built followed Leonarda Da Vinci's mantra "Simplicity is the ultimate Sophistication".

Both the book and the man, impacted me ... and made me to think. Here are some highlights from the book:


Posted by Saro Velrajan at 7:27 AM No comments:

"What Young India Wants" ... the title caught my attention. I haven't read Chetan Bhagat's books in the past. However, I have heard from my friends that he is a great writer. Recently, I learned that the super hit movie "3 Idiots" is based on his fiction novel. That increased my curiosity to read his latest book "What Young India Wants".

Chetan has done a fantastic job of covering all the issues that plague our society. He says that the situation in India today isn't a result of bad politicians but due to bad citizens. We are the ones who select bad politicians. The engineer in him tries to give objective solutions to all the problems - while many of them are practical... some of them were completely out of the charts. For ex., his recommendations for moving government establishments and government guest houses to the city outskirts will create more problems than solving them. I love his idea of having institutions that develop politicians. I think that is definitely the need of the day.

He tries to play it very neutral. On one side, he criticizes one family running the country generation after generation. On the other hand, he is appreciative of what Sonia Gandhi & Rahul has done / trying to do to India. He equally criticizes the top 2 political parties in our nation.

For people who think "India cannot be changed... the situation will continue to be like this forever"... you should read this book once. There are chapters in the book that are very inspiring. I personally like the two short fiction stories at the end. Very entertaining and at the same time hard hitting.

"Good to Great and the Social Sectors" claim that the "Good to Great" concepts are applicable to social sectors too, with little or no modification. Jim compares and contrasts the difference in challenges between business sector & social sector. The amount of research done to substantiate the material is less when compared to the original "Good to Great". However, the facts presented are convincing enough.

Reading "Good to Great" is a pre-requisite for this book. You would not be able to fully appreciate the material without reading "Good to Great". This book compares the challenges of Social sector and business sector, in great detail. I would recommend this book for leaders of non-profit organizations.


Author's website: http://www.jimcollins.com/
Posted by Saro Velrajan at 12:25 AM No comments:

Are you interested to know how WalMart, IBM & HP became superior organizations? Jim & Jerry present their findings about these successful companies and many more. Some of the key take aways from this book are "Preserve the Core Ideology & Stimulate Progress", "Try a lot of stuff and keep that works", & "Companies built just for generating profits do not become superior".

Have you been postponing your entrepreneurial venture just because you couldn't find a 'niche'? The authors give a variety of examples where some of the great companies didn't start with just one particular idea or product. They tried a number of things before they found their 'magic formula' for success.

I still couldn't completely buy-in to the "Home Grown Management" concept. May be the authors didn't do a good job of convincing me enough.

If you really wanted to know the strengths of the companies that are "Built to last", you should read this book.

Author's website: http://www.jimcollins.com/
Posted by Saro Velrajan at 12:36 AM No comments:

Brag!: The Art of Tooting Your Own Horn without Blowing It

Do you work hard but do not get the promotion that you deserve? Do you feel shy to talk about yourself? Are you unable to impress the interviewers when you look for job? Well, here is your magical guide.

Peggy Klaus explains how you should be prepared with 'bragologues' for different situations. The author gives you some techniques that you can start using right away.

The author gives several examples, most of them were involving (and for) women. I strongly believe the bragging problems that men have are different than what women have. I wish the author had some additional material to cover the 'bragging' problems & solutions that are specific to men.

Overall, this book was an interesting & quick read.

Author's website:  http://www.klausact.com/
Posted by Saro Velrajan at 12:31 AM No comments: